The part of All Saints churchyard immediately surrounding the church has been declared “closed”. There is no room for more burials in this area. There is a “new” section of churchyard to the rear of the church which remains open for burials. The Local Government Act of 1972 requires that where a churchyard has been closed by an Order in Council, the Parochial Church Council (PCC) shall maintain it by keeping it in decent order and its walls and fences in good repair. A PCC may transfer responsibility for maintenance of the churchyard to the Parish Council. In 1997 responsibility for maintaining the closed churchyard passed from the PPC to Great Addington Parish Council (GAPC).

The transfer of responsibility for closed churchyards to local authorities was not intended to confer any privilege upon the Church of England. It was recognised that until the 19th Century Burial Acts , churchyards were often the only burial places available and were (as they still are) the common burial places of the parishioners of any denomination and none. As the churchyard was available for the whole community, and had sometimes been provided by means of a compulsory church rate, it was considered reasonable that when it was closed in the interest of the community, the expense of keeping it in decent order should be reimbursed to the churchwardens.

GAPC’s responsibilities include maintenance of the churchyard wall. It had been obvious for some time that the wall had bulged and would need attention in due course. During the summer of 2007 the contractor who mows the churchyard grass noticed that a gap had opened up behind the wall along Cranford Road, indicating possible recent movement of the wall due to the pressure of the retained earth. GAPC felt that, in addition to considering a simple repair, we should explore the possibility of rebuilding the wall further back into the churchyard so that the extremely narrow footpath on Cranford Road could be widened. 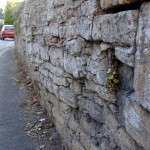 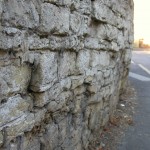 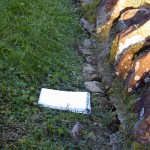 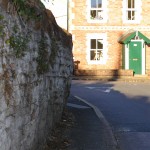 “Before”. Wall bulging at narrowest part of footway.

We held discussions with representatives of the Chancellor of Peterborough Diocese, Northants County Council Highways Dept and the church architect. Three significant points were established:-

As a result GAPC commissioned Bruce Deacon Architect Ltd. to write specifications and obtain tenders for repairing the wall on its existing base. The architect surveyed the entire wall on both Cranford and Woodford Roads and divided it into sections according to the degree of repair needed. The scope of work included rebuilding on the existing base or re-pointing, as appropriate. Tenders were been obtained from three contractors with experience of similar projects and the lowest cost tender identified.

GAPC applied to the Chancellor of Peterborough Diocese (through the Diocesan Advisory Committee) for a Faculty to allow the repair work to proceed. The Faculty was awarded in February 2009.

Anglican churches in use are exempt from the requirement for Listed Building Consent, because of the control which the Church of England exercises through the Faculty Jurisdiction.

The lowest of three tenders was selected and the contractor put “on stand-by” awaiting funding. The work was divided into four sections with a total cost of approximately £9,250 excluding VAT, but including professional fees. Since taking responsibility for the closed churchyard GAPC had built a small reserve fund to cover such work. This reserve was insufficient to meet the full cost. The Council therefore sought financial support from Local Government, charities etc. We are indebted to the following for their generous support totalling £4500 :- 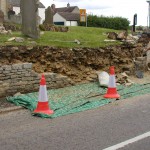 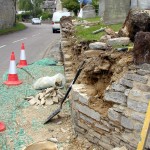 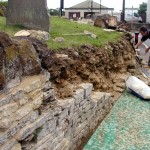 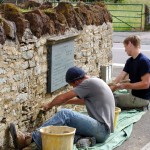 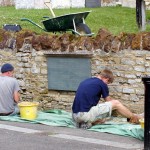 The necessary funding was in place by the end of June 2009. Work started on 6th July and was complete before the end of August 2006. 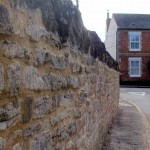 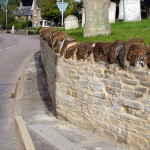 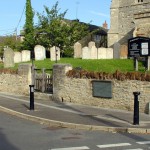 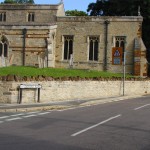 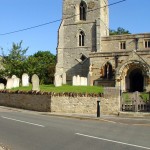